Click the image to learn more about the health-efficiency index and to see the latest index rankings. The United States is tied for 54th!

The United States annually spends more than $9,500 per person for health care. Nonetheless, the effectiveness of this spending lags far behind many other nations (that spend a lot less).

According to a recent Bloomberg report:

“Want medical care without quickly draining your fortune? Try Singapore or Hong Kong as your healthy havens. The U.S. will cost you the most for treatment, both in absolute terms and relative to average incomes. Yet, the life expectancy of Americans — about 79 years — was exceeded by more than 25 countries and territories, according to an annual Bloomberg analysis in almost 200 economies.”

“A health-efficiency index was then created to rank those with average lifespans of at least 70 years, GDP per-capita exceeding $5,000 and a minimum population of 5 million. And Americans aren’t getting their medical money’s worth, according to each of the categories.”

“The U.S. had the second-highest per-capita spending on health care at $9,536. Switzerland’s average based on gross domestic product was $9,818. But that $282 supplement helped deliver an extra 4.2 years of life — with the average Swiss lifespan of almost 83.”

Click the image to learn more about the health-efficiency index and to see the latest index rankings. The United States is tied for 54th! 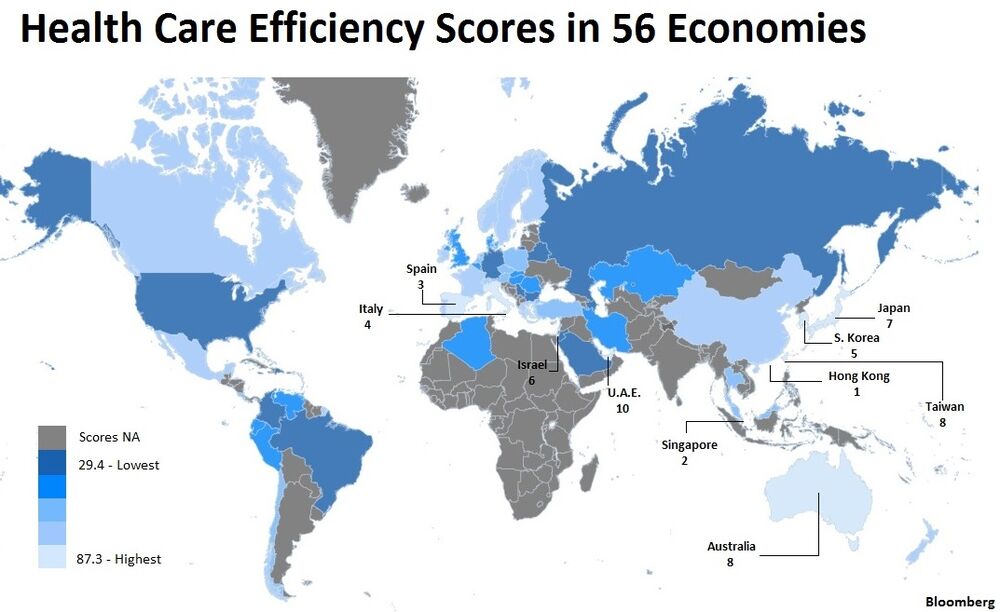